While cruising around Santa Fe, more than one stranger told us to take the scenic High Road to Taos, and make sure to stop at Rancho de Chimayó for lunch. Although not technically in Taos, Rancho de Chimayó might be my favorite meal near in Taos! I haven’t seen a stuffed sopapilla anywhere other than New Mexico, and their shredded beef stuffed sopapilla is gastric perfection. The restaurant has a lovely dining patio and grounds. If you have time, stretch your legs and explore a bit before you get back on the road.

After about two hours of scenic views and New Mexican sky, we made our way into Taos and our Airbnb host mentioned that during the summers there is music in the plaza every Thursday night. I expected some small affair with a jazz trio. Instead, it was a full rock band, complete with a dance scene. If you can make it into Taos on a Thursday night, I highly recommend you enjoy the show and get your groove on with the locals.

Pro Tip: Not unlike the Turquoise Trail, the High Road is not easy to find, but once you are on it, it is easy to follow. If you are coming from Santa Fe, take the 76 highway past the Cs (Cuartelez, Chimayó, and Chamisal). You will eventually turn right on the 75 highway past Peñasco, then catch the 518 all the way to Taos. 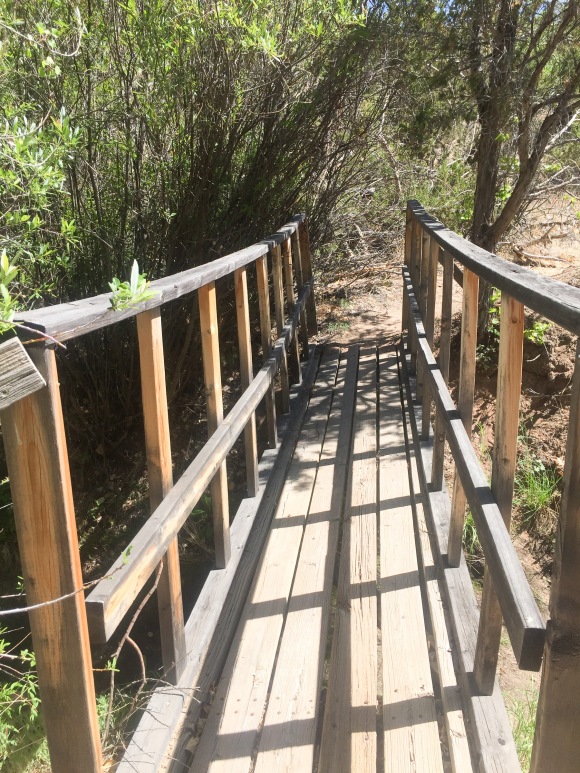 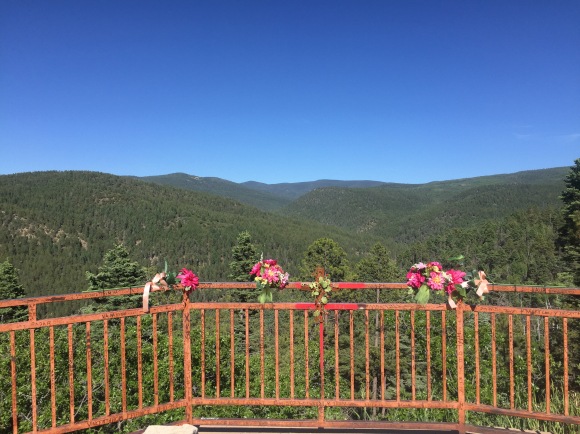 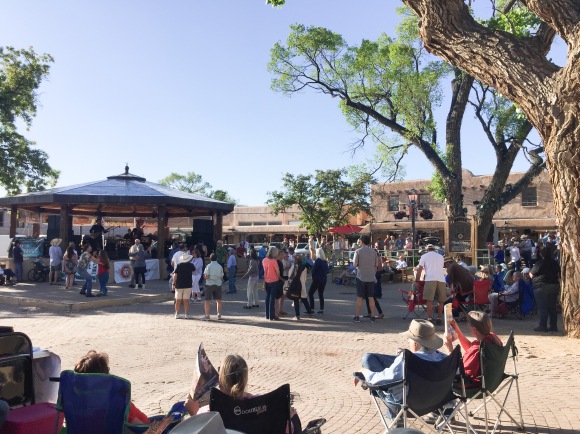 We got up early to visit the historic Taos Pueblo, which is oldest continuously inhabited dwelling in the United States, having been built anywhere between 1,000 and 1,400 ACE. The people of the Taos Pueblo have a rich history, that is distinctly tied too but often ignored in the context of broader US history. I could write pages on this, but I would rather you visit, so what you need to know is that when the Spanish came up from Mexico in the mid-1500s they brought Jesuit priests with them. The order proceeded to build the mission of San Geronimo de Taos despite resistance from the actual residence of the pueblo (surprise, surprise!). By 1660 the native peoples killed the priests, destroyed the church, and took back the space. The reclamation was a precursor to the Pueblo Revolt of 1680, where more than 15 pueblos banded together to kill, or drive out over 2,000 Spanish settlers. Not to be deterred the settlers came back and rebuilt the church of San Geronimo a third time in 1847. This time, the people of the Pueblo rose up and killed the governor. In retaliation, the US cavalry decided it was time to commit a massive war crime, not only quashing the uprising but massacring the women, children, and elderly who had taken refuge in the church along with anyone who participated in the rebellion. (That’s right, children–which often gets left out of the history books, also, not a surprise).

But the story is not done! (And there is a lot I am glossing over, otherwise, this post would be seven years long.) In 1970 the people of the Pueblo successfully argued for the restoration of their sacred Blue Lake, which was taken from them in 1906 by Roosevelt (possibly the best thing Nixon did for the United States…). This happened after spiritual leaders in the community spent decades advocating for the pueblo’s restored right to control their natural resources. In summation, from building and maintaining the oldest consistently inhabited dwelling in North America to restorative legal advocacy, the people of Taos are badass.

Pro Tip: Both the language and faith are considered sacred to the Taos Pueblo Indians, so don’t expect details on either to be shared. However, there is still a ton to be learned. I highly recommend taking a guided tour, which is led by members of the Pueblo and runs on tips so bring cash (please don’t be that person who tips $2, that is just tacky). 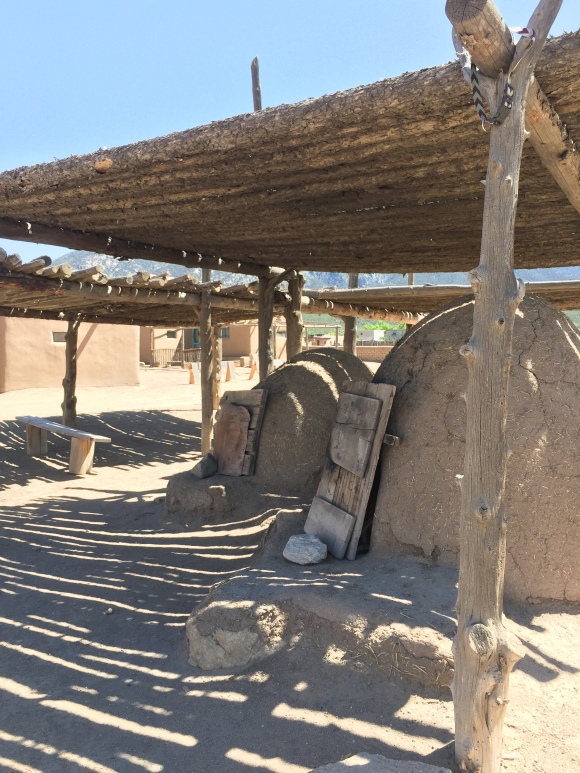 The real star of the Taos show is nature. And, nowhere is it on better display than the Rio Grande Gorge Bridge. Admittedly, I almost skipped this, but everyone and their mother was excited about the bridge, so we made the trek out. Growing up in Seattle, I’ve seen my fair share of rivers and canyons, and this one ranks with the best of them. Once you get used to the wind, you’ll enjoy the impossible feeling of walking hundreds of feet above one of the most amazing natural wonders this country has on display.

After marveling at the landscape that brought artists aplenty to Taos, we decided to make San Francisco de Asis Mission Church aka the O’Keefe Church our last stop. While the church’s facade is iconic, the inside is what I love most. Originally built in the late 1770s, the church is now a historic landmark, and for good reason. Not only has it inspired countless artists, but it has three of the most unique alter pieces I have ever seen, located at the three points of the cross. (For those less familiar with Catholicism, church interiors are often structured in the shape of a cross, in this case, the three points I’m referencing are the front center, left, and right of the church.) All of the alter pieces are hand-carved, and there is a certain level of raw emotion and complete skill to them that will take your breath away.

Pro Tip: The art inside the church is tempting, but they ask that you enjoy it without photographing it. Similarly, it is probably a good idea to drop a coin in the box if you are a visitor, because a) karma, and b) this is how the church is able to maintain the space for the next generation of visitors. 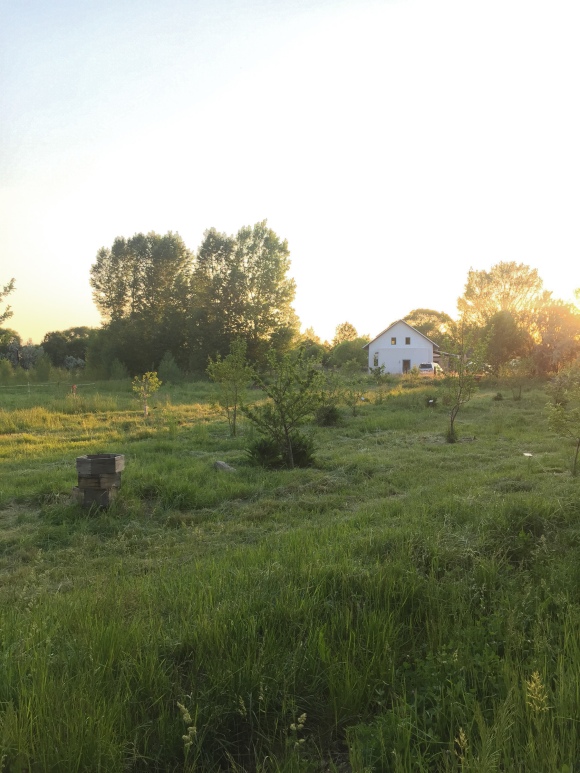 2 replies on “A Weekend in Taos”

The information is really great – and the pictures are gorgeous. I miss the high desert, the sky and the chapel- it is perfection. Thanks for sharing your adventures, I always learn so much and get great travel tips!

Thanks! I thought of you the whole time. The Southwest is just lovely!