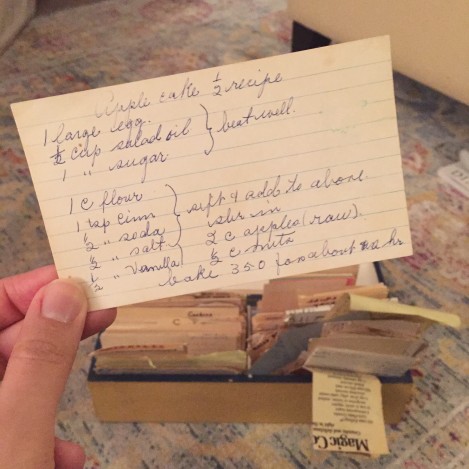 So here is the thing about working off of someone else’s recipe. The idea sounds deeply romantic. Old family recipes passed down generation to generation, each woman living a different and unexpected life with this one thing in common. I mean, the idea is hallmark movie level awesome.

That is until you try it.

The thing about someone else’s recipe is that it was written for them, with their kitchen accouterments and baking knowledge in mind. For example, my grandmother notes that this is a 1/2 recipe, but I have no idea what the size of the original was. I assumed I needed to put it in a pan, but I just get to guess what kind of pan, along with guessing what the hell salad oil is and just picking whatever kind of nut I want to stick in this bad boy. Basically, the skeleton of something tasty is there, and that’s literally, all she wrote.

Accepting the mysteries, I get started. Not knowing whether to core and peel my apples or how to cut them, I took my best guess. Skin on, ’cause I am lazy. Chopped into small bits, ’cause trying to eat massive apple bits in a cake sounds difficult.

After that, I took my best guess at salad oil. Olive oil, while the most logical choice, seemed odd. That said, my grandma did not mess around about salad and I know exactly what she put in them, and it was olive oil (This is only kinda a joke. A “nice big salad” was served at EVERY MEAL of my childhood. Consuming vegetables without lettuce was not something I did until well into my 20s). So, I decided to get creative and combine equal parts olive oil and vegetable oil. Because why not?

After that, I decide that whatever nuts I have in the house are going in the cake, in this case, pecans. I don’t like walnuts much. They taste like dirt.

Then I mix all of this goodness together and try the batter. WHICH IS SHEER MAGIC, PEOPLE. Next, I dump it in a single cake round, because the card said cake and stick it in the over for an unspecified amount of time, which ends up being under an hour (Grammy, you lied!). It makes my house smell like heaven, and suddenly, I am very excited to share this cake with people. Perhaps, my book club?

I pop it out of the oven and realize two things very quickly. 1) This recipe is inaccurately named. It should have been called a coffee cake, and 2) It probably should not have gone in a cake pan. Unfortunately, grandma did not leave me any instructions on how/if I should let the thing cool all the way before trying to remove it from the tragic pan of my choice. I opted for a middle of the road approach. Somewhere between cookies and bread.

That was not a great idea. My newly formed plan to take this thing to book club died in my kitchen because I am nothing if not a presentation perfectionist (this is an inherited trait from Grandma Lucille Bluth…not great). That said, I wish I had brought the damn thing to book club because even in its sad state, the thing was GOOD. Like, so good I ate all of the different pieces of it in four smooth days. By myself.

It was so good that I am excited to make it again in the right pan. And the nice thing about this cake is that it is really simple. Odds are, you have everything you need to make it right now.

Lessons, for those who want to bake like Lucille:

Addendum: I called my mother to discuss my “cake” failure and send her the recipe. She seemed to think that an 8×8 was obvious because it says 1/2 at the top…no mom, it was not obvious. Similarly, she thought it was clear one would use vegetable oil. Just because. THAT IS NOT CLEAR. YOU KNOW YOUR MOTHER LOVED OLIVE OIL ON SALAD. She did agree that you could do whatever with the nut situation. I forgot to ask about the apples, so good luck on that one.