My grandmother was the living, breathing, incarnation of Lucille Bluth.* With one notable difference. 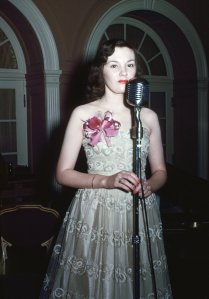 My Grammy, sometime in the late 40s.

Outside of gin, my grandmother loved two things. Her pets and food (Yes, I intentionally left her children and eating off this list). Which meant that after she passed, she left a very well stocked kitchen for her five daughters and two granddaughters to clear out. We inherited all kinds of fun gadgets. We also inherited a recipe box full of the meals she and her mother, aka great-grandma, had lovingly made for others for over roughly 50 years.

This is the part where I give you a tiny amount of back story so you can appreciate the rest of this. Just bear with me. My grandmother came from the middle of nowhere Nebraska, from a fairly well-to-do family in an insanely small farming community. Eventually, she would meet and marry my grandfather, become a doctor’s wife (trust me, she liked to act like this part didn’t matter, but status mattered to her) and have five lovely daughters, the youngest of which is my mother. 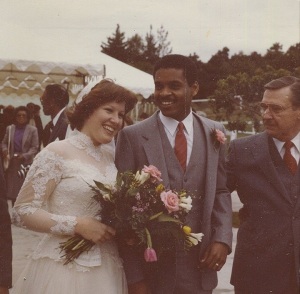 The CREATORS aka my mom and dad.

This is where the story gets interesting, mostly because it pertains to me. My mother would go on to marry my dad. A Black man from Los Angeles (via Texas people, but that’s for a different day), and they had three wonderful children in Seattle. Someday, I will chronicle that family drama, but suffice it to say, that when my grandma and great-grandma started writing these recipes down, they sure did not expect “someone like me” to be cooking off of them years later. Jokes on them!** 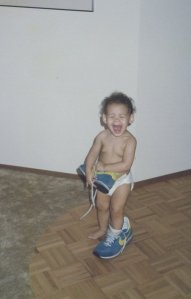 Me (this photo may be a metaphor for my life).

Anyway, if you are reading this post, it is because you were oddly invested in the backstory behind the food section of my writer’s blog. Now you have it, so go enjoy my attempts at learning to bake like two Midwestern women with a fondness for cutting out newspaper recipes and a dislike of writing down the important stuff, like what the hell salad oil is, or what type of pan you should bake anything in. The good news is, one of them may have been a drunk, but both of them were damn good cooks. So pour yourself a drink, and try a family recipe. You *probably* won’t regret it.

*Now, let’s be clear, I loved that woman. If anyone outside of the family makes fun of her, I will fight you. We got beef. So just shut up about my grandma, OK?

**This is the part where I note that my grandparents et al eventually got over the fact that my dad is Black, and really did love me and my siblings a hell of a lot. I feel that if I didn’t offer this disclaimer a) my first disclaimer would make very little sense and b) my mom would be very angry at me. And I love my mom. A lot.