Our final stop on our whirl-wind Guatemalan adventure was Antigua, the colonial gem and third capital of the country.  A UNESCO World Heritage Site, around nearly every corner of the city, is an earthquake ruined structure that has seen many lives over the hundreds of years since it was initially built. Many of the larger buildings now serve as either government offices or markets, and I made it my mission to explore them all.

The group wasted no time getting to know the city and its history. One of our first stops was the Plaza area to check out the colonial style municipal buildings and the cathedral. Guatemala has a complicated history with religious orders, particularly the Jesuits who are responsible for the colonial structure of the city.  In my post on Guatemala City, I mentioned that the main cathedral was moved after it was repeatedly devastated by earthquakes. This is that cathedral. The front half of the structure managed to stay standing during the earthquake that devastated it in the 1770s, so the people of Antigua walled off the damage and continue to use the space today. But walk around the corner, and for a small entrance fee, you can explore the space as it would have been hundreds of years ago. To say the ruins feel like magic is an understatement. Eerily peaceful and bathed in sunlight, plants now reclaim much of what would have been the slave, and priestly quarters.

Pro Tip: Unlike a lot of colonial cities, Antigua is walkable and remarkably easy to navigate. The city’s center is set up as a 7×7 grid, with each street named by the number and whether or not it is running east (pointe) to west (oriente), or north (norte) to south (sur). Avenues (avenidas) run north to south and streets (calles) east to west. 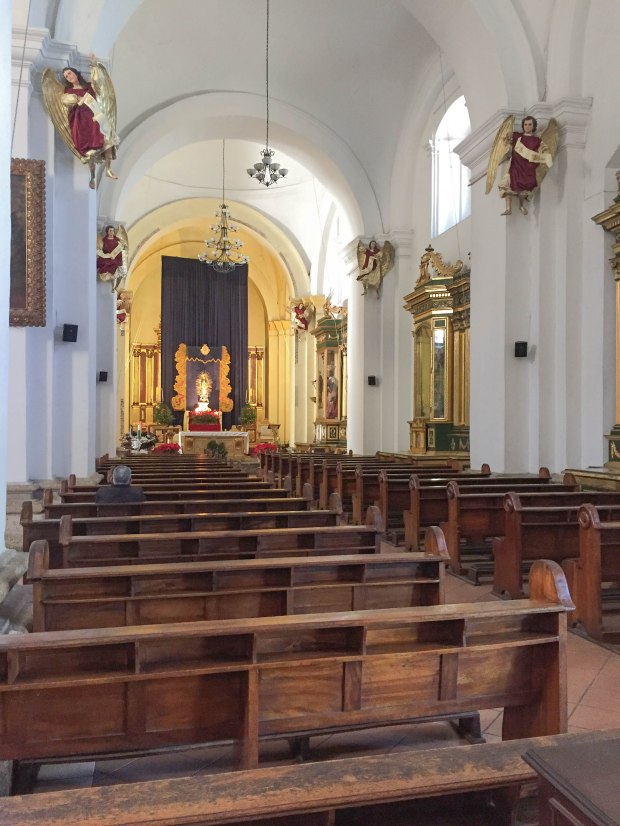 Section of the cathedral that held up during the shakedown.

The side that did not fare so well in the quakes. 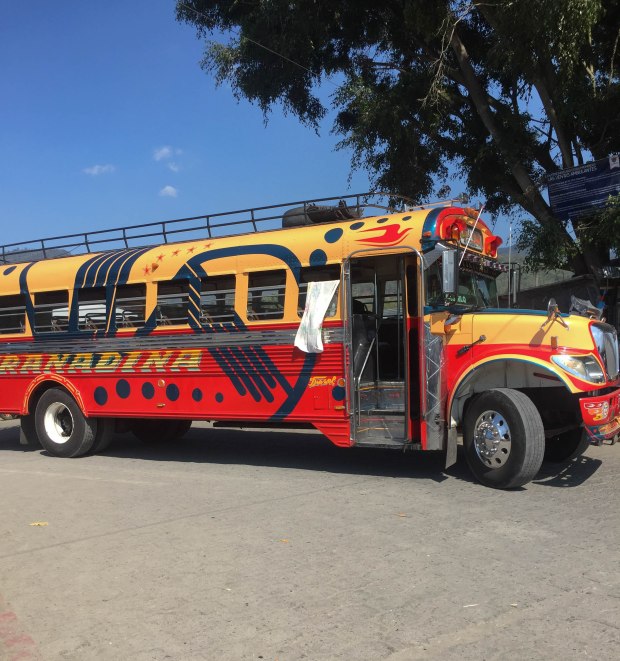 On the local bus to a weaving coop. Dad takes selfies seriously.

We also stopped by the main market in Antigua, which is open Mondays, Thursdays, and Saturdays. The market epitomizes busy, and we weren’t even there on a Saturday, which is the day when everyone comes out in full force. I always enjoy seeing the grocery shopping customs in other countries and cities. For example, in Antigua, the butcher picks your cut of meat based on what you plan to make.

Behind the market is the main bus hub. As I mentioned in my post on Lake Atitlan, local buses are a very different affair than in the States. For one thing, they have so much personality. For another, the general safety standard you may be used too do not necessarily apply. There is basically a guy whose job it is to ride on the outside of the bus and help people on and off in as fast a manner as possible. That said, the buses are cost effective, so if you don’t mind a bit of haggling and are comfortable using your Spanish, they aren’t a bad way to get around.

Around the outskirts of Antigua are coffee farming communities, which is where we headed next, to learn about one of Guatemala’s biggest exports. Our trip started up with a hike up Volcán de Agua to reach the farm, along the way our guide explained that he worked with De la Gente, an NGO that helps farmers trade directly with roasters, allowing for greater profits for the farmers, which in turn helps local economies. This collective bargaining method also allows farmers to invest and grow their businesses. Our guide started with a small plot and over the years had grown his farm to 30 hectors (about 75 acres). After learning about the process of growing and harvesting coffee, we headed back to his home where we learned how locals have traditionally roasted their coffee and shared a meal.

While in town, I also caught a night out. Nights spots are as ubiquitous in Antigua as are the bro tourists in them. While I had a delightful time dancing, I did not enjoy the totally bizarre, smelly American dudebro in a unicorn onesie who our group could not shake. Sir, if you are reading this, not cool. Don’t roll up to other people’s countries and act like a mess. It’s embarrassing. Also, just because you are away from home doesn’t mean you can’t wear shoes…or shower. Gross dude!

All jokes aside, Antigua is a popular destination for tourists, so you should be in good company if you are in a nightclub or bar. If you don’t speak Spanish this is your chance to chat up others and ask about any sites, or spots you should see while in town that may be off the beaten trail.

Pro Tip: Market days are not for the faint of heart. The market is crowded and particularly labyrinthine as far as markets go. Watch your belongings closely, and if you choose to by, be prepared to haggle.

Who knew this is what a coffee plant looks like?

Coffee fields in recovery. Notice Volcán de Agua smoking away in the background.

Like a cool kid, I decided to spend the last day wandering around with my dad. Our first stop was the Jade Maya, a jade jewelry factory, and museum. Guatemala has a long and impressive history of jade craftsmanship, and the museum does a great job of bringing it to life. They even have a fun dark room where you can get a sense of how ancient Mayans approached astronomy. That said, the coolest part is the open workshop, where you can watch modern-day artisans work on the jewelry you see in the storefront.

We then hiked up to Cerro de la Cruz, the massive cross on top of the hill overlooking Antigua. After a 20-minute paved walk, you will catch the most stunning view of the city, complete with a panorama of all three volcanoes that surround the city (Agua, Fuego, and Acatenango). We were lucky that Volcán de Agua felt like putting on a minor display while we were there, complete with lava and the whole nine yards. From the ground, the air just looks smoggy, but when you crest Cerro de la Cruz, you can clearly see it is volcanic ash.

By the time Dad and I climbed down the hill, we decided we were thirsty, and should probably go rum tasting to remedy it. We popped over to Casa de Ron for a Zacapa tasting. It is Guatemala’s premium rum and you can pick it up just about anywhere. That said, if you want someone of the older, less common vintages, you will need to go into the store. Neither my dad or I are big rum drinkers (whiskey for life!), but this was well worth the money. We had a blast sitting and sipping different liquors and ended up buying a bottle aged rum that tasted a lot more like smokey bourbon to us. It was a perfect way to end the trip.

Pro Tip: We stayed at the Hotel Camino Real, which is as lovely and romantic as the town itself. Located on the edge of the city, it is just removed enough from the city center to get a bit of peace and quiet, while still being close to the action.

The garden at Jade Maya is just as lovely as the stones they sell. I swear I have more photos of the hanging orchids than I have of myself. 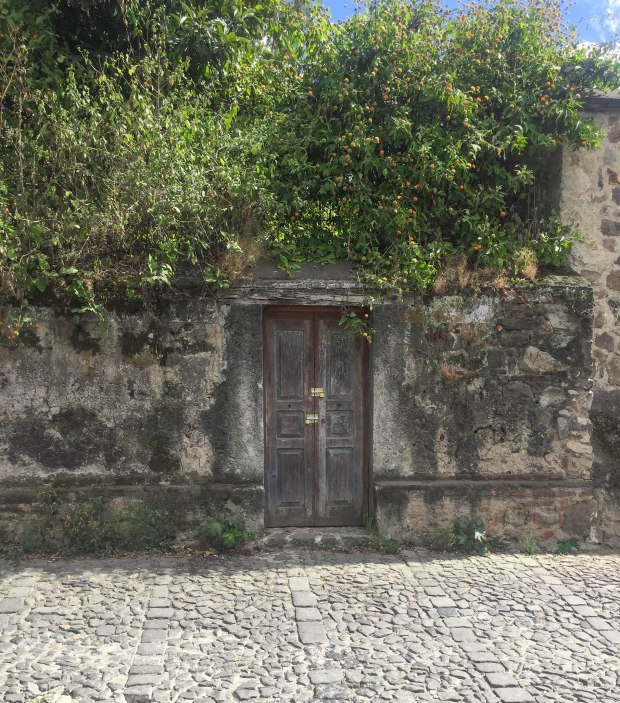 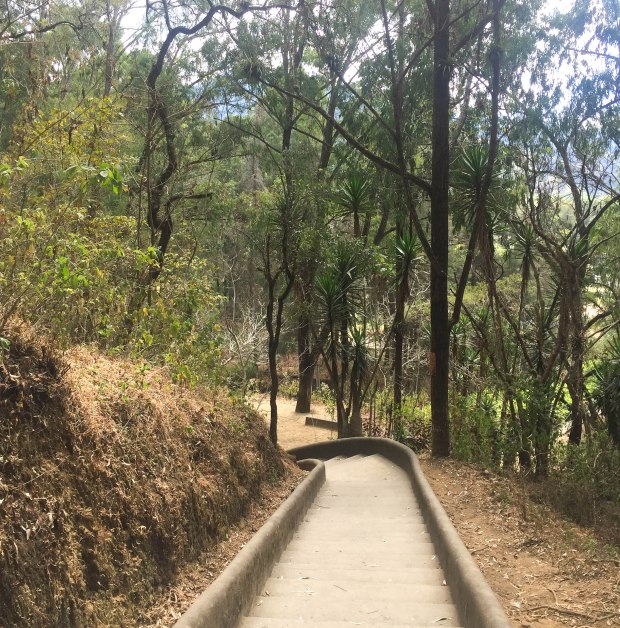 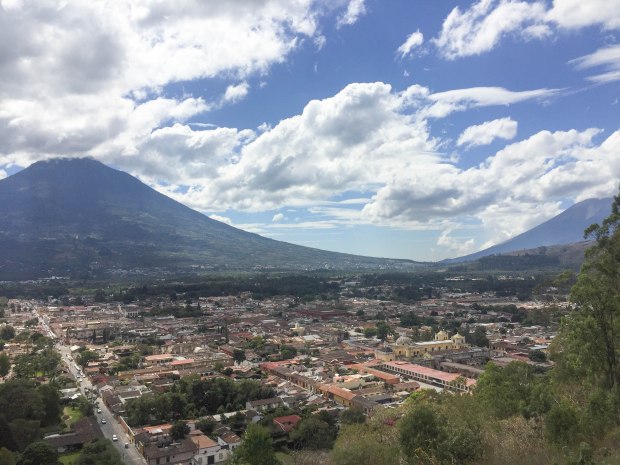 Poor Dad can’t even try his rum in peace without me and my camera gatecrashing the moment.

Photo credit goes to a student, who snapped the at 7A Pizza. A delicious gourmet pizza spot is hidden right next to some church ruins. The patio is the spot to be!