I make zero apologies for how much I love New Orleans. In fact, I am a sanctimonious NoLa traveler who openly pities those who think that the city is exclusively Bourbon Street and cemeteries. Which is why it’s funny I finally went to what is arguably one of their biggest tourist events, Jazz Fest, and had a blast. If you aren’t traveling to New Orleans for Jazz Fest, that’s OK, there is plenty here for you and I go pretty regularly, so circle back for more suggestions in other posts.

One more thing: We spent four days there for my sister’s 30th birthday. Our group was large, which can be tricky in NoLa (at times 10 people), but with all the different travel times, we really only needed to make big reservations at a few spots, which I will indicate with a +.

Our group stayed in a house in the Broadmoor/Freret neighborhoods which are a little quieter than the French Quarter, but closer to the festival grounds, bars, and restaurants.

Our first stop on the list was the delightful +Bacchanal Wine+ in the St. Claude neighborhood as you head toward the ninth ward. They have live music, a wonderful patio and, most importantly, a wine and cheese shop. It’s a great place to acclimate yourself to the pace of NoLa. It does get crowded, so go early to make sure you get in.

We then went back to our neck of the woods for +Boucherie+ which is fantastic, upscale dining. It is a mistake to think that NoLa food is all fried fish. Boucherie’s food is delicate and thoughtful. I recommend the duck and the Krispy Kreme bread pudding, which will change your life!

Pro Tip: Make reservations especially if you are going to New Orleans with more than a group of four. Also, know that you cannot book a lot of places online, you need to call the old fashioned way. It is worth it, so don’t stick to the three places on Open Table.

The best thing about Boucherie is that it is close to Gasa Gasa a perfect live music venue. We came for Red Baraat and if y’all have a chance to see them live, I insist that you do it. I saw about a zillion acts over the course of the weekend and they were one of the best, funkiest bands by far. If you aren’t obsessed with them before you see them, you will be by the time you leave.

Pro Tip: Right next to nothing in New Orleans runs on time. The show at Gasa Gasa started two hours late. But the opening band was amazing! Be OK with being late and be flexible with your plans.

Next, we headed to Jazz Fest aka the best music festival. Seriously, I will never look at festivals the same way again. Everything about Jazz Fest is relaxed, you can bring lawn chairs, nobody shoves, the food is reasonably priced (and AMAZING) and there are bathrooms aplenty. Most importantly, the organizers don’t want people to dehydrate and die, so bottled water is cheap, and they have free fountains. The quality of this festival cannot be overstated. Also, it was $80 for a day pass, so STUFF IT COACHELLA.

I had initially planned to run to every stage and see all the bands, but as with all things in New Orleans, I changed my plans and parked at one stage for most of the festival. My favorite line-up of the day was Jon Batiste and the Stay Human (aka Colbert’s band). The music was so beautiful I cried. The Batistes are a long-standing New Orleans musical family, so needless to say Jon Batiste is talented. But as a musician, I did not anticipate how otherworldly his talent is. Plainly speaking, the guy is a genius.

We also saw Marc Broussard, the Dirty Dozen Brass Band, the Alabama Shakes (ok, some of us also went to the Roots + Usher, or Maroon 5) and the Comanche Hunters Mardi Gras Indians. Special note about the Mardi Gras Indians for those of you who didn’t watch Treme/don’t know – read up on them! It is a fascinating piece of Americana that you won’t find outside of New Orleans.

Pro Tip: Jazz Fest is old school (NoLa is in general). Print out your tickets and come prepared to pay cash for everything.

Post festival, we fêted the birthday girl before heading over to the French Quarter. When you see New Orleans on TV, you are usually looking at images of the Quarter, which is home to Bourbon Street, Frenchman Street (where a lot of live music is), and ton of really wonderful history. I’m not covering it in this post, but if you haven’t been before, please invest in a tour of the French Quarter. It has some powerful history beyond liquor and good times. My entire family recommends Crescent City Bike Tours.

We decided to stop by the Frenchmen Art Market before crashing Cafe Negril which does not have a cover but usually has a fantastic reggae set. We finished the evening with a required trip to Cafe du Monde for beignets. Let’s be clear, tourist trap or no, du Monde has the best beignets. Consume them at your own risk, because you will never be happy with another beignet again after having one. 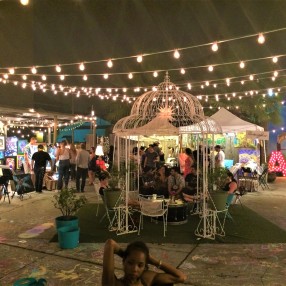 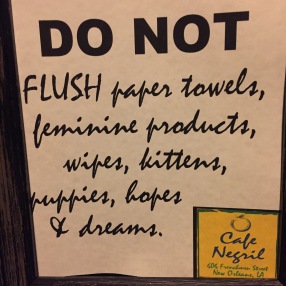 The following day we got hit by a tornado (classic New Orleans weather), but not before we grabbed a bite at +Willa Jean,+ towards Central City, near the oft-ill-remembered Superdome. As with all food in New Orleans, this place was good. We then headed back to the house to wait out the rain before a few of us made our way to City Park for a post-brunch-tornado beer walk! Here again is a great way to enjoy a local NoLa beverage and see a real city gem.

Pro Tip: New Orleans is known for drinks, so I encourage you to try something local (Sazerac is my personal favorite). If you aren’t in the mood for a cocktail try any of their gazillion local beers. I always get at least one NoLa Blonde and an Abita Purple Haze while there. They aren’t expensive, but they hit the spot.

Eventually, we made our way back to the French Quarter for dinner at the +Three Muses+. The food is always good, and the cocktails are a treat. If you decide to go, make a reservation. This is one of the few restaurants in New Orleans that has a time limit on your table because they are a small space with live music. The staff can be hit or miss, but the restaurant is so perfectly situated, and the food and ambiance so darling, that you just have to overlook it (I’ve been several times and some of my servers have been the downright best humans ever, and some a little less attentive).

The real reason we were back in the French Quarter was to catch Tank and the Bangas at the Blue Nile. This was the best show I saw over the course of the long weekend. The band is spectacular and Tank is the musical queen this world does not deserve but is lucky to have. I would see the act again in a heartbeat.

We ended the night with a flat sober, massacre of several pounds worth of street crawfish.  See photos for evidence, and judge not lest you find yourself outside of a New Orleans club staring down the clawed goodness of a local delicacy. And, by the way, should you find yourself in that situation, EAT THE CRAWFISH. They are another New Orleans treat that you won’t find cooked-up like that anywhere else.

Pro Tip: The Blue Nile almost always has a cover charge. I have loved every band I’ve seen at the Blue Nile, so pay the money. You won’t be disappointed. 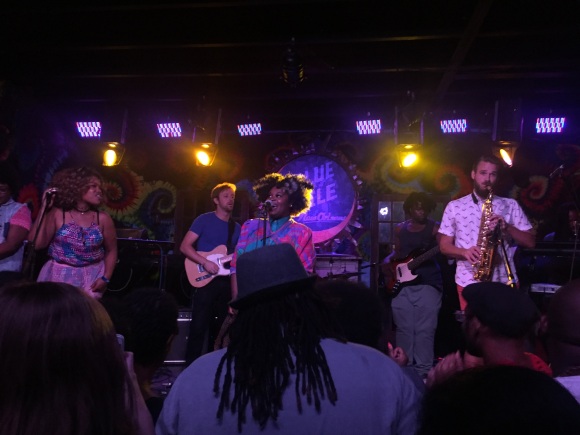 Before leaving, we made three stops I want to give a special shout out too: 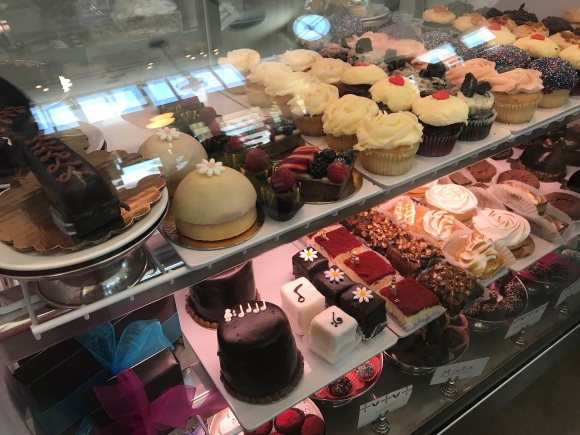 Photo credit once again goes to the nine ladies I was with, who all dumped these photos (and more) into a file. You all are the best!

4 replies on “New Orleans: Tips for Travel in the Big Easy”

Nice tips – there are so many great places in the Big Easy – always up for more ideas.

Thanks, Bill! You’ll have to let me know if you stop by any of the spots and what you think!

[…] all know I love NoLa. I’ve covered it on my blog a few times. OK, really just here. But, the love real and so I had to go back again for JazzFest. I thought I would take JazzFest off […]

[…] Alabama Shakes and a storm brewing at the New Orleans Jazz Festival. […]