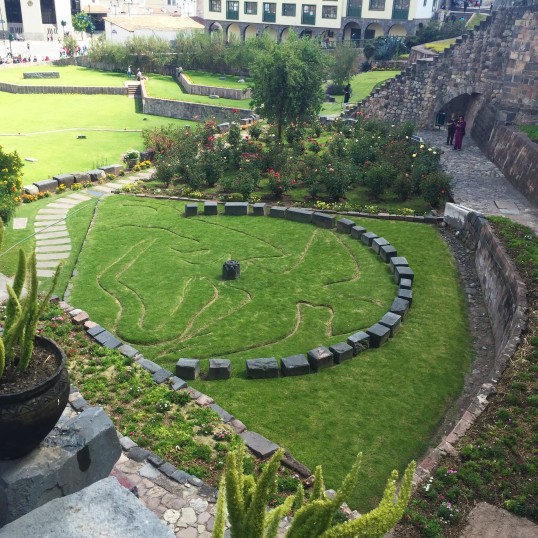 So I mentioned earlier the details of my trip are slightly out of order for ease of story telling. If you are dying to know the nitty-gritty details of my trip, let me know and I will get them to you. Anyway, this post is all about my time in Cuzco and Lima (including the aforementioned marathon of doom). Get ready, cause it is a long one.

Alabaster and I spent four days in Cuzco, and I wish we had spent one more. There is so much to see and you will want to take your time seeing it. While there we did our own exploring, particularly around the San Blas and the Plaza de Armas. Not unlike the rest of Peru, the food in Cuzco is as amazing as it is creative, so each morning I made it my mission to track down a different bakery for breakfast empanadas and pastries. It turned out to be a fun and tasty way to see the city.

In Part Two, I highly recommend you get a guide to take you through the city. We took a private full day tour of the city and learned a ton. Our guide started us out by walking down to past the Coricancha (the ancient city walls) into the Plaza de Armas where we stopped to see a number of incredible old buildings, including the Cathedral. Like a lot of buildings, the cathedral is covered in Latin Crosses and Incan iconography which is a fascinating part of Peruvian history and the fight against oppression. Also important to that fight is the Museo de Arte Religioso, which houses paintings from a number of impressive artists, again, with a distinctly Incan take on many classic biblical scenes.

Produce at the San Pedro Market

Garden of the Archaeological Museum

Juice form the San Pedro Market – Well worth the 2 soles! 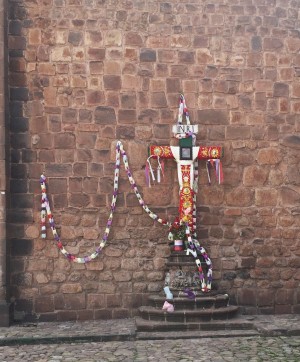 Decorated cross outside of the Cathedral

Me propping up “White Jesus”

The ruins at Sacsayhuaman.

After lunch, we stopped by the ruins just outside of Cuzco. Like Ollantaytambo, these ruins are smaller but no less interesting. The largest set being Sacsayhuaman, which was originally a massive citadel. They are a serious architectural marvel and bonus – the name sounds like sexy woman – see now you want to visit too!

Honestly, I was learning so much that I forgot to take pictures half the time, so what you see is about all I took in Cuzco – Sorry! (Not sorry.) A final note about Cuzco, which applies to all of Peru for the most part, the people there are super friendly and warm. Seriously, it was like visiting a small town in Washington, just a massive friendly, helpful, kind one.

After a few days in Cuzco, it was time for us to hop on a plane so I could run the marathon. I had been told that there wasn’t much in Lima, but whoever said that was a big ole liar cause Lima is awesome.

We were lucky enough to have a friend living there who had some great suggestions for us, one of which was to have dinner at Huaca Pucllana, a restaurant that over looks some of the ruins in Lima. Not only is the food good, but it was a great way to kick off our time in Lima. Katie also had a few other tips to share, which I will now pass on in the form of a…

Pro Tip! (You know you missed it…): Eat ceviche early in the day. Lima is right on the water, so if you want the freshest of the fresh stuff, go early and come hungry.

Armed with Katie’s pro-tip, we went straight to the Canta Rana (Singing Frog – lol!) in the Barranco District. The Barranco is home to great shopping, among other fun things, so you should add this spot to your list of must-dos. Run by a soccer lover, the ceviche cannot be beat.

Later that night we did my favorite thing ever and booked a private tour and dinner at the Museum Larco. Formerly a private collection, the museum houses Peru’s largest collection of ceremonial vessels, along with a massive amount of pre-Incan artifacts. I almost wish we had gone here first because there was so much to see and learn about the cultures that contributed to the Incan Empire. Our guide was amazing, the food was wonderful and we had a blast. Thanks in *large* part to the room of erotic ceremonial vessels. Seriously, they were as interesting as they were 1) optimistic and 2) hilarious. 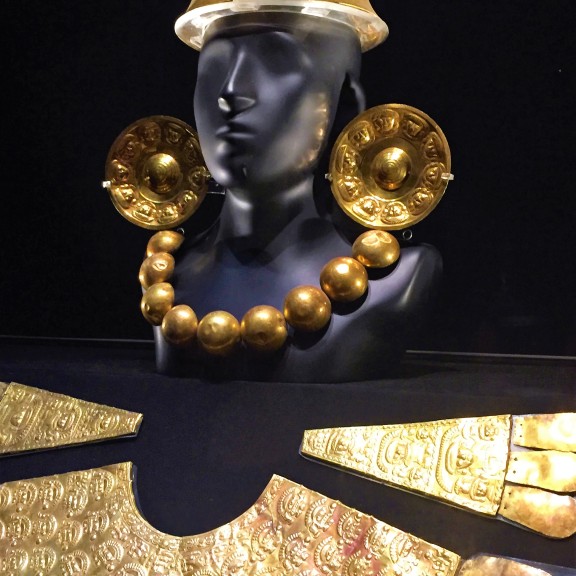 The stunning metal work of the Chimu people

The patio where dinner was served

Alibastor and me in the vault of vessals

After bopping around the city for a couple days, it was time for me to get hit by a serious case of nerves/prep for race day. This was not my first international race, so I had a pretty good idea of what I was in for an how to prep. (Eventually, I will write a post on that, I swear). That said, every expo holds a few surprise. Although both of us have some Spanish, Katie and I discovered that we had no way of asking for safety pins for our bibs. After trying valiantly to describe them, we thought we were told they were not included and to buy our own.

We spent the next hour and a half look for the pins, only to eventually discover they were inside our timing chip envelope. HA!

Luckily, we both made it to (and through) race day, which was no walk in the park. The Lima marathon is pretty well organized. That said, Peruvians have to be some of the most chill runners in the world. They all turn up five minutes before the race, with little to no gear and just go. All of the not-locals running the race were stunned. The course was half uphill and had a six hour cut off and they were all cool customers about it. My new marathon goal = be zen like the Peruvians.

Big ups go to Alabaster for waiting for me at the15-mile mark and the finish line, holding all of my stuff and not freaking out when I crossed and the doctors tried to put me in a wheel chair. Also, big ups to the doctors who listened to me beg for my medal/refuse to sit in said chair in exhausted Spanish, even though said lady with the medal was 4 feet in front of me.

Finally, big-ups to water, power aide, and beer. Which got me through my shower and into bed. 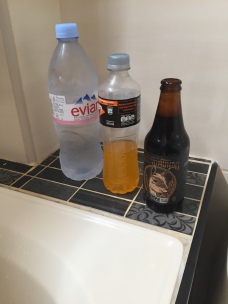 And that my friends, is all of Peru!